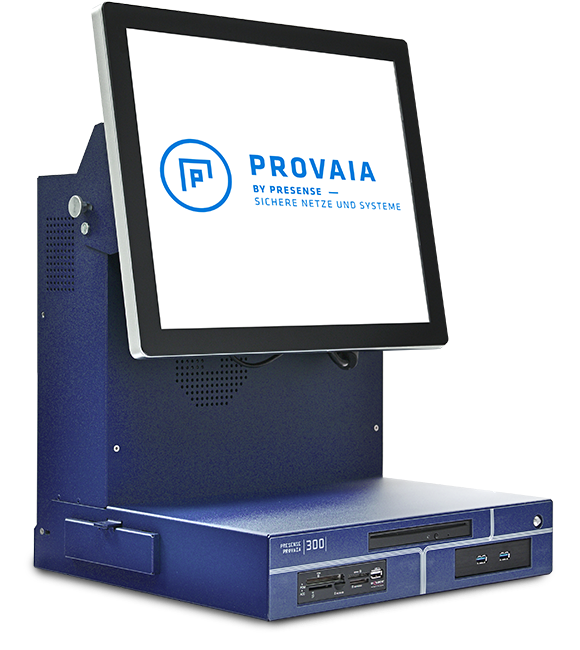 The Security gateway for removable media PRESENSE PROVAIA (see video (German)) is a new security service that addresses current risks associated with the exchange of information via mobile media and devices.

Network transitions are already successfully monitored - this is known as perimeter protection. The import and export of information via mobile data volumes represent a considerable risk to IT security.

In the top 10 lists of manufacturers of anti-virus software, the top position is held by malware software, which spreads via infected files and mobile media. If the anti-virus scanner at the workstation is the only safeguard against the infiltration with malware programs, then mobile media become an incalculable risk. Disabling interfaces, as well as a general ban on mobile devices, is often not possible because no suitable alternative exists in many working environments.

These risks can now be effectively countered. With the PROVAIA appliance, a security perimeter is established for the company network, in which the mobile media can be checked without risk and cleaned as necessary. Through the combination of various security mechanisms, a level of protection that extends far beyond established solutions is achieved; one that is practically impenetrable to malware. Extensive configuration options exist, so that the security service can be individually tailored to the requirements of an organization. This means that IT security guidelines can be implemented at central points, without affecting business processes and work sequences. In order to achieve a high level of acceptance among users, the housing has been optimized with regard to the task at hand, and fitted with a touchscreen.

The PROVAIA appliance has the following features:

PRESENSE develops the PROVAIA appliance entirely in Germany and as a vendor has signed the initiative IT Security made in Germany (www.itsmig.de).